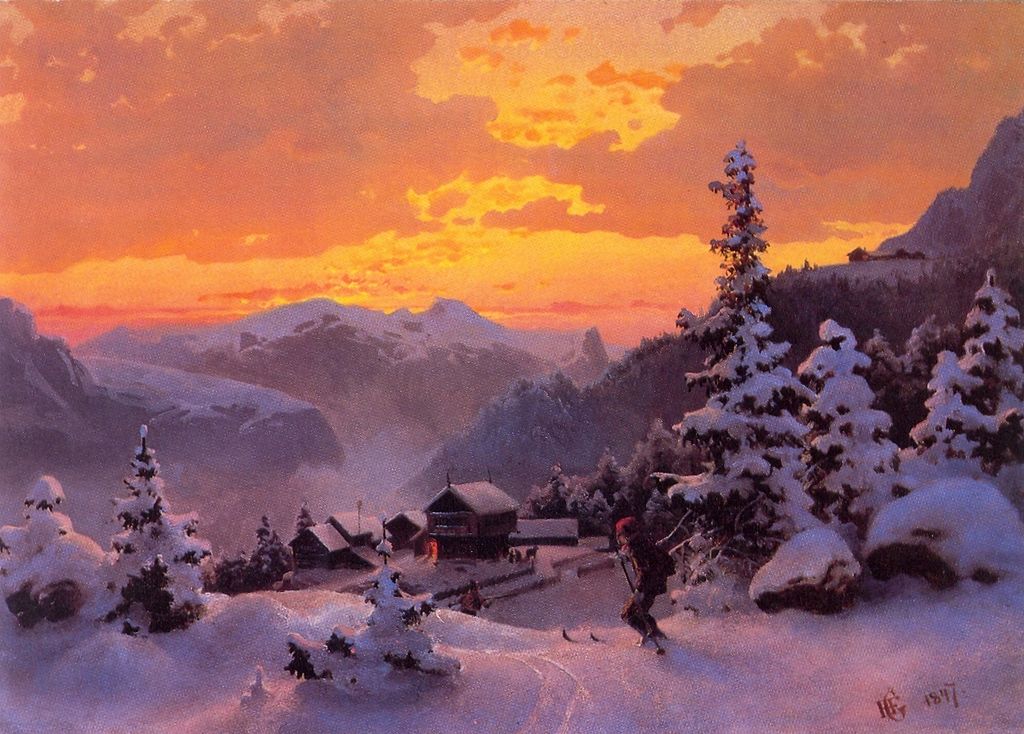 "Out of the Blue"

a tale from Telemark, Norway


When Torgrim rounded the next bend, he let himself slide to a stop. He rested a moment, leaning on his ski-pole, studying the way ahead. The trail swooped down one long hillside and up the next, gleaming pale blue under the winter sky. Evening shadows lurked under the snow-laden spruces that hugged the path.

"Time to start looking for a place to stay the night," he said into the silence, his words wafting in clouds. He pushed off and sailed down the slope, his speed carrying him a good way up the next hillside.

No sign of any dwelling. No one on the trail to ask for directions to shelter. No sound but his skis whisking the snow, and his own labored breathing as he labored up the empty slope.

Suddenly, out of the blue, sleigh bells sounded right behind him, and the clopping of hooves. Torgrim whirled.

A one-horse sleigh pulled up. "Want a quick ride home?" asked the driver.

"Ah, no," Torgrim answered. "I have such a long way home it can't be done in one evening.*"

The stranger patted the seat beside him. "Come on. I'll take you."

A thief, luring victims to their doom? Torgrim backed off a step, thinking of his dagger, tucked away in his backpack. "You have no idea how far it is to my home.* I live way up in Gudbrandsdal.*"

"I know where you live,*" said the fellow, "but you have no idea I'm your neighbor,* do you, Torgrim?"

Torgrim searched the man's face, still not recognizing him, but a thief wouldn't know his name.

"Take a seat now, and I'll have you home before your wife Anne brings the evening porridge to the table.*"

The fellow even knew his wife! Must be safe enough to trust this man. He stepped onto the back runners.

"No!" said the stranger. "Come sit up here on the seat.* Back there, you can't hang on well enough, how fast my horse runs.*"

"It would be a marvel if he runs as fast as my fine trotter I sold today in Kongsberg.*" Torgrim settled in.

The horse took off like an arrow. The wind howled and whistled in Torgrim's ears, and he fell back, clinging to the side of the sleigh. Everything blurred with speed. What was that flashing past? Treetops? Was the sleigh flying through the air?!

The horse slowed to a stop. Torgrim sat up, shaking, and looked around. The farmyard in front of his own house, could it be true? He leaped down, darted to the window, and looked inside.

There stood Anne by the hearth, stirring porridge.

Still marveling, Torgrim turned to the sleigh. "Come in for supper!" he blurted without giving it any thought. "The least I can do in return."

"I shall take nothing in payment for the transport,*" the sleigh-driver said. "But promise me one thing.* Move your stable, for each time the horses piss, it drips down on my table.*"

A tusse-man, Torgrim realized, who must be living in the haunted mound behind the cowbarn. "Wh-where should I put the stable?"

The fellow pointed to a different site. "It won't be any trouble for you, moving the stables.* Just take the horses out tomorrow night, and all their tack.*"

"Th-thousand thanks for the swift passage, and my blessing upon you!" Torgrim said.

The tusse-man nodded, then vanished, horse, sleigh and all.

The next day Torgrim emptied and cleaned the stables.

The following morning, the stables stood upon the new site, rebuilt in the dark of the night by tusse-magic.

This story is found in the anthology...